My name is Mario and I am 60 years old. People of my age plays cards, go out cycling, collect stamps, but rowing is my passion. Althoug sometimes when I look in the mirror, I ask myself if I am too old. Yet my heart tells me to carry on and the medical check-ups alay any worries.

My story started at 17 when i joined the “free rowing course” organised by Naples Rowing Club (Circolo Canottieri Napoli). At the time I was a big lad – a bit overweight – so I decided to take up a sport make me feel more confident. To get the “look”, to get the girls. I loved football and sea, and I admit that the free part of the course was the bit tha lead me to Molosiglio, where the rowing club is still located.

Memories of an old racing west

It was hard: you had to learn to run, lift weights and row in a rowing tank, where the Assistant Coach, Giuseppe Gomez – called Pippotto – decided whether you rowed on the right or the left. That was haw I became, and remained, a “bow-sider”. Having only just started going out on the Bay of Naples in coastal eights, fours and sometimes doubles, i was hooked. I left behind me the hustle and bustle of the city, seeing it in the distance while the keel cut through the water and the oars sliced it rhythmically. I could feel the weight of the wooden hull and feeling of lifting it, driving it ever faster, and avoiding the over-exertion that comes from wanting to row harder. This all lead to a complete addiction. 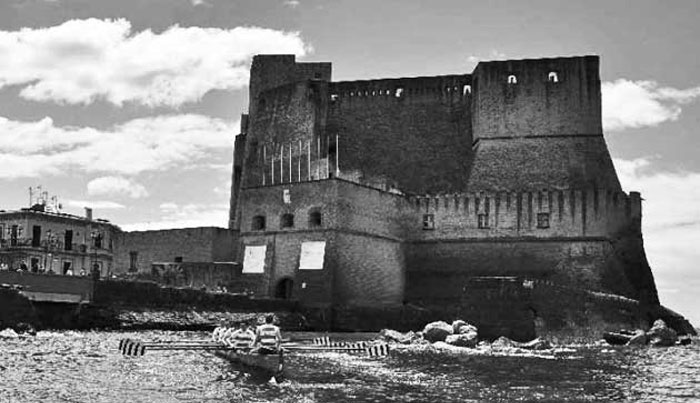 Many fellow rowers fell by the wayside, not being able to manage work with the long, exhausting, daily outings. Marcello James, our coach, allowed us just one day off: Mondays. In Spring, it became even worse because we no longer trained on the sea, but went almost every day to lake Patria, about thirty kilometres from Naples. Then came the regattas and I got my race colours: a woollen racing vest with horizontal yellow and red stripes, the colours of Naples.

At first our results were disappointing, later we won the historic Lysistrata Cup. The following year was another season as a senior rower, culminating in the University Championships on the artificial lake, Idroscalo, at Milan, where our eight finished in second place. At this point even I had a break: had I been an aspiring national squad rower I would have carried on. The truth is that I was tall enough for a lightweight but over the weight limit by 5 or 6 kilos which I could not have lost. I had an unsuitable physique to compete with others who are at least 1.90 metres tall. This was how my yellow and red racing vest ended up at the bottom of a drawer, along with my unfulfilled dreams.

cdhcbdchdbchdbcdMany years have passed, during which my life has unfolded like a film: degree, military service, work, marriage, children, move to Milan. Years of happy events alternating with the more distressing, as happens to everyone. Yet in my dreams, I would often find myself in a rowing boat, even comtemplating an imaginary regatta race. However, when I awoke I believed that I would never go out in a boat again: rowing is a sport for competitive people – not one for nostalgic escapists. 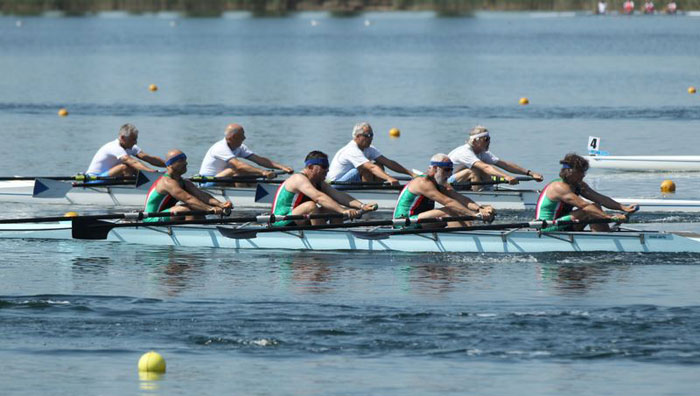 During the winter of 2012, though, while looking for something to catch my interest, I saw the San Cristoforo Rowing Club sign along the canal at Milan. I thought it would be the perfect place to lose a bit of weight on the rowing machine. Instead, I cautiously started going out in boats again. I have lost weight and I am fairly fit again, now that I can manage three or even four training sessions a week. I took part in the Vogalonga (the ancient Venetian rowing event), and with three other adventurous souls, we threw ourselves into training and raced at the Italian Masters Championships.

Then, one Sunday morning, a friend Raffaele Mautone asked me to row in an eight. It was just the same as 42 years ago, at the University Championships, at the Idroscalo Lake in Milan. The crew was a mixed bunch: young mums and youngsters of thirty- and forty-something. I was the only one over sixty. What better time to get my old yellow and red racing vest out of the drawer? It’s a bit heavy and rather smelly now; very different from the modern all-in-ones made from super-light fabric. So, looking a bit like the Michelin man, I put it on again, realising that whether from luck or desire, dreams can come true.