I have always loved rowing because it teaches us about life. A sporting career only lasts a short time and the art of rowing gives you heightened awareness and focus on the difficulties to be overcome in everyday life. This is what happened to me.

In 2004, I become the World Champion in the coxed pair with Mario Palmisano and our cox Luigi Longobardi on the Spanish lake at Banyoles. My name is Mattia Trombetta and I am an italian rower. I had never believed in the existence of the Devil until the day I became his bowman. This is my story.

In the Spring of 2004 – the year of the Athens Olympics – I was dropped from the Olympic Squad. And after the third round of the World Cup, at Lucerne, the same happened to Mario Palmisano, Lorenzo Carboncini, Valerio Massimo, Edoardo Verzotti and Stefano Introzzi. All “thrown off course” at the World Cup by the category changes for the Olympics. As you might imagine, their mood was not the best. The Italian Technical Director, known as the Doctor (Giuseppe La Mura, Ed.) had decided to try a coxed four with Lorenzo, Edoardo, Valerio and Stefano, with Alessandro Speranza as cox – it went really well. Mario and I though, sorted ourselves out in a coxed pair – something that neither of us had ever been fast in. For a cox, we got on board the very young Luigi Longobardi.

Whether in the boat or out of it, we hardly ever talked about rowing. We had between us a sort of tacit agreement to show that we weren’t so hopeless. Mario vented his anger in the boat. He had never lacked physical strength. But during that period, he rowed like a runaway horse. He really was “possessed”. At the time, I was listening to a lot of Rolling Stones’ music and Keith Richards’ was sometimes known as the “devil’s guitarist”, so it was natural to call our boat the “The Devil’s Coxed Pair”. 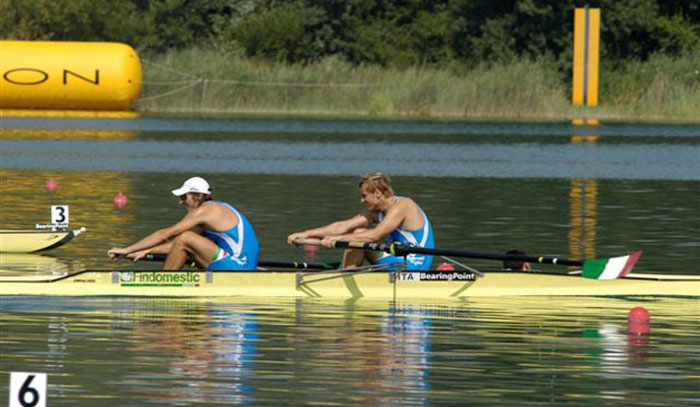 The poor young Longobardi was the one who paid for Palmisano’s “exuberance” – he was the one who got the “tongue-lashing”. Being taller than Mario, I felt obliged to calm things down between them. So while I was being good cop, he was bad cop.  After all Luigi was just a kid who had despite himself found himself in the Devil’s Coxed Pair.  The truth was that we were the rejects. Disappointment could destroy everything or reinforce the crew. And thankfully the latter is what happened. Together with Valerio, Stefano, Edoardo and Lorenzo we decided to call ourselves the Inmates. 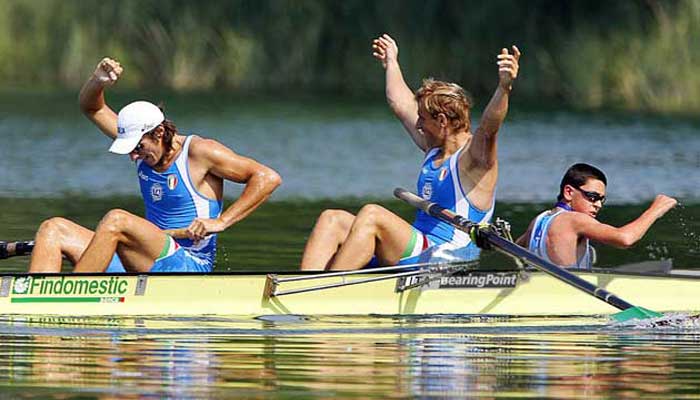 One evening before we left for Banyoles, we left the rest of the squad to go for a drink in a pub in Terni. After a few rounds, the table had accumulated quite a number of beer mats. This is how the game started. We placed the beer mat on the edge of the table and with the swipe of a hand we knocked it into the air, then tried to catch it mid-flight. Suddenly, Mario got serious. He picked up the beer mats and said, “If we take them from the first stroke, we can win Gold”. I don’t remember how many there were, but it was quite a pile. One by one he set them all up – and I could feel the tension building. Not just me, but the other lads felt it too. We held our breath…and he did it first time! 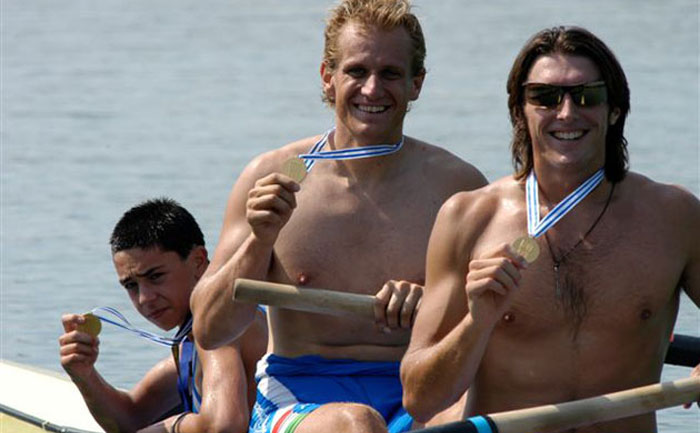 At the World Cup, from the start of the heats we noticed we were fast enough to put our competitors under pressure. Finals day was the 1st August 2004 and we had an appointment with destiny. We took the lead and at 1,250 metres we countered a lethal attack by Poland.The attack fought off, we easily controlled the Final and crossed the finish line first. It was like an exorcism. After the win, the Devil’s Coxed Pair was gone – like our anger. 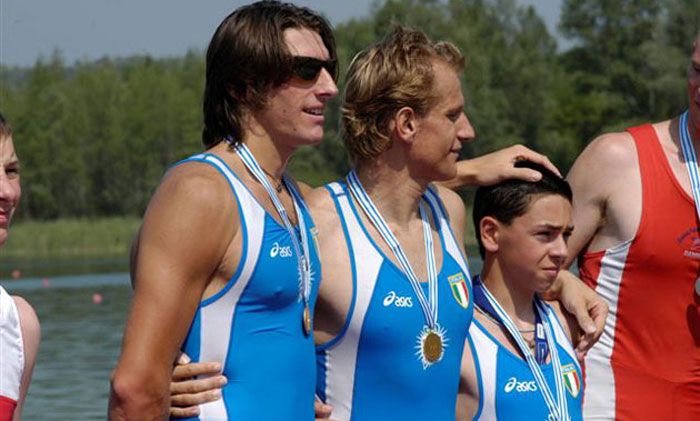 Even the tough Mario dissolved on the podium and gave the cox a hug. The following year, we won the Italian Championships in Milan, in the Aniene Club colours. Gaetano Iannuzzi took Luigi’s place. We won, even though Mario was no longer “possessed” by the devil. The Devil’s Coxed Pair was no longer.