Rowing a sport made up of choices. But most of the time it won’t be you who’ll make them – it’ll be your coach. One of these, and possibly the most important, is whether you choose to row sweep oar or to scull.

Usually your coach will decide this based on what the squad needs or which boats are available. It can also be down to his/her personal choice. For example, sweep oar was my coach Aldo Calì’s preference, even though he had won in the 2x with Davide Tizzano.

One thing is certain: you’ll be in the capable hands of your coach. Unless you have a strong enough character to choose for yourself. Still it’s not easy – and I’d say nigh on impossible – to find a coach with such a weak personality to let you make the choice. If I had to offer advice, I would have no qualms about recommending sweep oar rowing. You just can’t compare it to sculling. 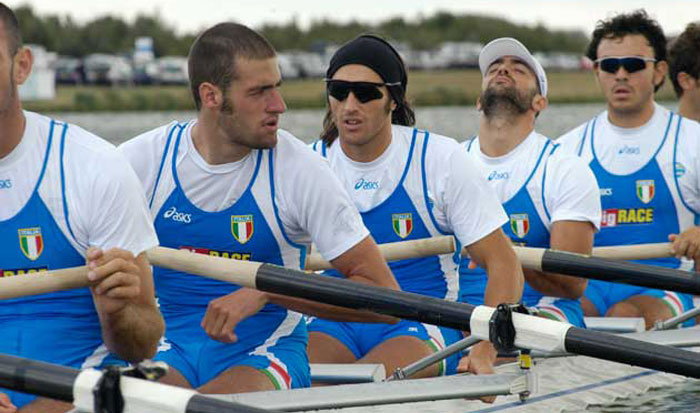 The sweep oar stroke is much more impressive, because the technical movement is more complex and takes longer to learn in comparison to the sculling motion. The oar itself is decidedly more significant, more “masculine”, due to its wooden handle. Whereas scullers always have rubber grips – where’s the appeal in that? But to hold a wooden handle in your bare hands is an indescribable feeling. Not surprisingly, we sweep oar rowers say that real rowing is with one oar and not a air of toothpicks!

Before any World Cup or Olympic Final, a sweep oar rower will take a sheet of sandpaperor even a shard or glass – perhaps even breaking a bottle – to rough up his own handle to get more grip. There are some, like Luca Agamennoni who, rather than rough up the surface, prefer to score it. While this certainly improves the grip, it chews up your hands at the same time. But a sweep oar rower is afraid of nothing. 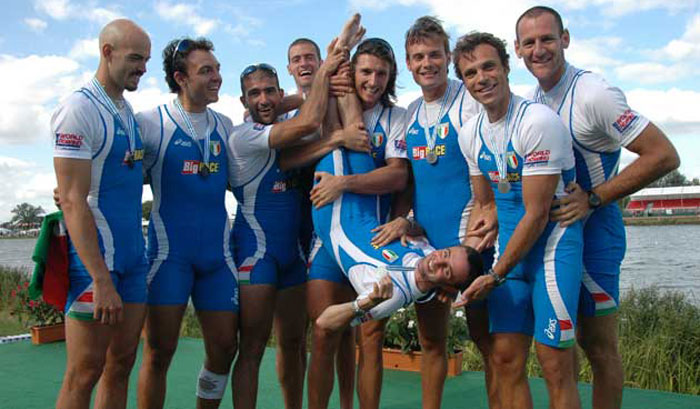 Besides, in sweep oar you always have to have at least one other person in the boat and often a cox too. Sweep oar represents the real core of team sport, and for rowing finds its best expression in the 8+. It’s the fastest rowing boat on the planet. So it’s not by chance that our flagship boat is a sweep oar boat.